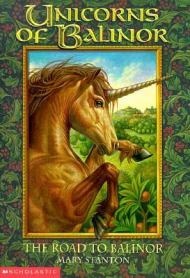 Ari awakes in the hospital bed with two broken legs and no memories of who she is or how she got there—the only thing she can seem to remember is her beloved horse, Chase, and the deep bond they share. Her foster parents, Ann and Frank, soon inform her that she suffered a terrible riding accident and that they cannot afford her medical bills unless they sell Chase to Lori Carmichael, the daughter of a wealthy family. As Ari slowly recovers, she grows increasingly distraught at the idea of losing Chase to such a spoiled and poorly-behaved girl, and runs away, with her faithful collie Lincoln and Chase in tow and Lori sneakily following closely behind. Not long into this escape, the group fall through the mysterious Gap, a pathway between worlds.

They arrive in Balinor, an opulent and magical land of unicorns, shapeshifters, and sorcerers. Ari soon discovers that she isn’t just an ordinary orphan from Glacier River Farm, but rather Princess Arianna. Chase is her bonded unicorn Sunchaser, Lord of the Animals and missing his power-wielding horn. Ari was sent to Earth for her own protection amidst the violence and chaos of her parents’ battle with the evil Shifter, and now must do her part to restore the kingdom to its former glory. With the help of the colorful cast of characters they meet along the way, Ari and her friends embark on a journey to recover Sunchaser's broken horn, and with his restored magic, defeat the Shifter once and for all.

This book contains all the hallmarks of imaginative children’s fantasy—magic, princesses, whimsical creatures, and definitive evil. It is a classic adventure story with a strong female protagonist and would likely appeal to elementary and middle-school aged children with an interest in fantasy and animals. While at times a bit predictable, this book—published in the late 90s— is ultimately the beginning of an exciting series that will entice young children to use their imaginations and foster in them a lifelong love of reading.